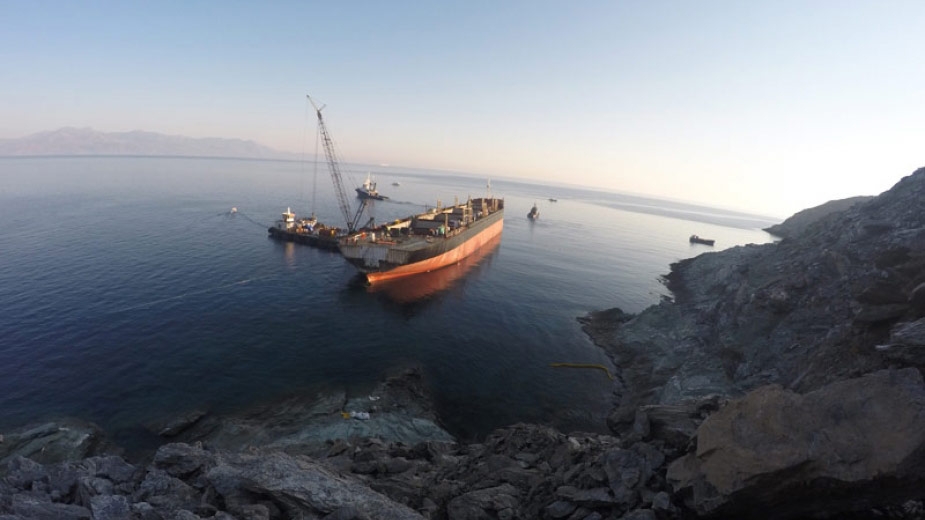 On February 10th 2015, M/V GOODFAITH amid severe weather run aground on the north coast of Andros. Bulk Carrier GOODFAITH of LOA 168 meters, breadth 27 meters and 27308 tons DWT. The ship had five holds with her lifting appliances which were consisted of four cranes for loading and discharging of cargo.

Following an International Invitation to Tender, our company “CHRISTOS XXII SPANOPOULOS TUGS M.C.”, member of Spanopoulos Group, was awarded with a Wreckstage Contract, in order to completely remove and safely dispose the vessel and any part associated with and / or emanating from the vessel of whatsoever nature to the satisfaction of the Principles and the Authorities. In addition, upon removal of the wreck, our company was assigned to completely restore the worksite, all access roads, working areas, all parts of the shore where the services were carried out and were otherwise affected by the Services, and also any and all other neighboring areas that had been used.

Spanopoulos group has a large fleet of tugs, floating cranes and barges which greatly facilitated the entire project. For this wreck removal operation, the group utilized an experienced technical team of naval architects, masters and environmentalists, guided under the supervision and instructions of a salvage master and a salvage manager who had the know-how from previous salvage projects. Due to the prevailing weather conditions in the entire area of Kafireas strait, the salvage team was forced to cease the operations several times in order to seek for shelter. Entire operation was carried out with a view to the safety of life at sea, safe working practices and due diligence to the protection of the marine environment. The Port Authorities of Andros were present throughout the wreck removal operations and constructively contributed to the smooth and proper conduct of whole process. The works were conducted with the cooperation and supervision of experts BROOKES BELLS, recognized and prestigious international company.

M/V GOODFAITH had suffered structural damages in her holds, in fore peak, engine room and in double bottom tanks. The ship heavily run aground on the rocky coast suffering a 9,5° list to the portside. The methodology followed, was based on studies and calculations made by the salvage engineering team of our company.

The main idea was to remove sufficient weight from the ship in order to minimize the grounding force as much as feasibly possible. This weight included the removal of vessel’s hatches, cranes, accommodation block up to main deck and removal of vessel’s stern (steering gear, A.P.T, various warehouses, etc.) up to the engine room’s aft bulkhead.

At the same time, the salvage team made the Cargo Holds #1, #2, #3 and #4 watertight with a number of patches installed. Major patches were constructed inside Cargo Holds #3 and #4. In Cargo Hold #2 the bilge wells were sealed in order to make the compartment water tight. In Cargo Hold #1 and in the Engine Room, divers used underwater welding equipment and rubber sealed patches in order to seal the cracks. Cutting and welding of the major patches were done by skilled ship yard technicians while the underwater patching was being performed by experienced divers. The last stage of the methodology used, included the sealing of the Engine Room compartment for air pressurization. In this respect, all openings above the surface of the water had been closed off by means of welding steel plates over all existing openings. Below the waterline, overboard valves had been closed and a number of cracks were patched; the Engine Room compartment was by no means watertight. Air hose connectors and pressure gauges were installed.

The Refloating operation Prior to the refloating operation, electrical pumps were installed in the Cargo Holds and mooring lines run from the wreck to the adjacent rocks. In addition, the vessel was enclosed by fence booms, to prevent the release of any trapped oil / unrecovered quantity to the adjacent rocky pool and/or beaches. The purpose of the mooring lines was to keep the wreck in position for sufficient time to ensure that there were no rock protrusions in the hull that might prevent movement of the wreck. Furthermore, a self-propelled floating crane was secured through her anchoring system and moored in perpendicular to M/V GOODFAITH as to keep her in position. This was an additional measure for more safe / ease position- keeping and therefore allowance during her removal from the grounding position.

Before the Ground Reaction approached ‘0’, tugs were connected to M/V GOODFAITH to assist in the operation. Upon completing the refloating sequence and confirming that the hull was clear, the mooring ropes to the shore were released and the wreck was towed sideways from the grounding location by means of tug boats until clear of the rocks. At a stand-off location in deeper water (around 100m to seaward of the grounded position) the wreck was brought to towage condition.

This operation was lasted 20 hours. M/V GOODFAITH towed from the Peza area in Andros to Spanopoulos group owned shipyard facilities in Salamis island (Greece) till the final destination to the demolition yard for its disposal. 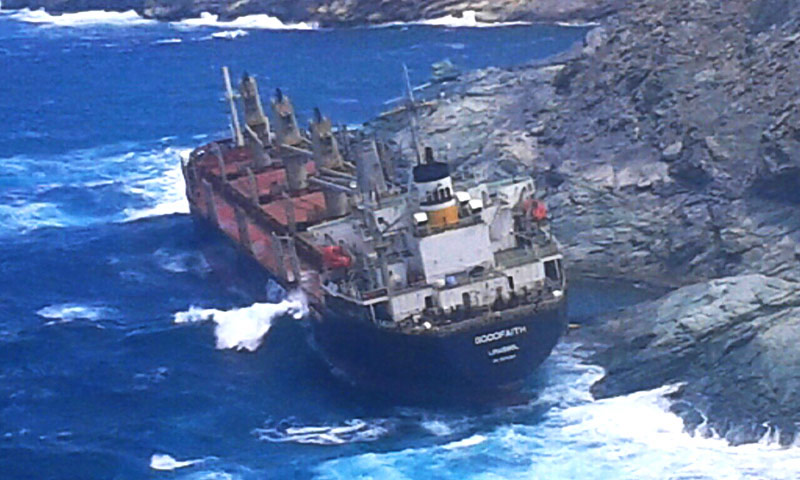 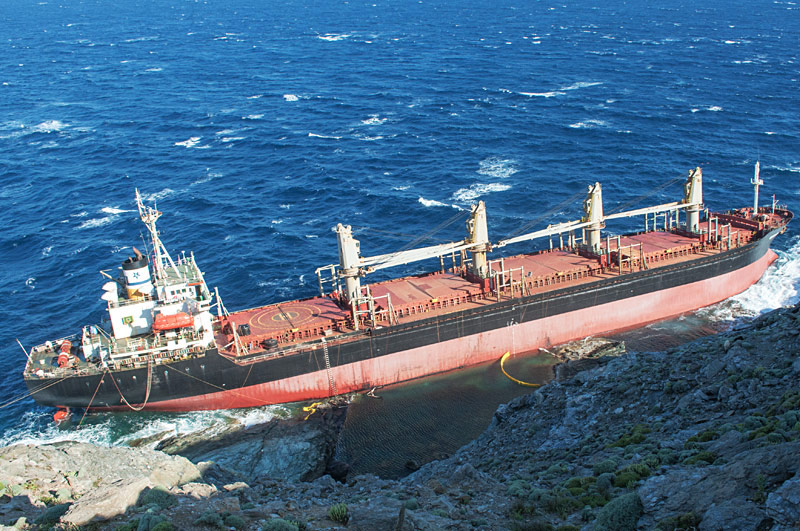 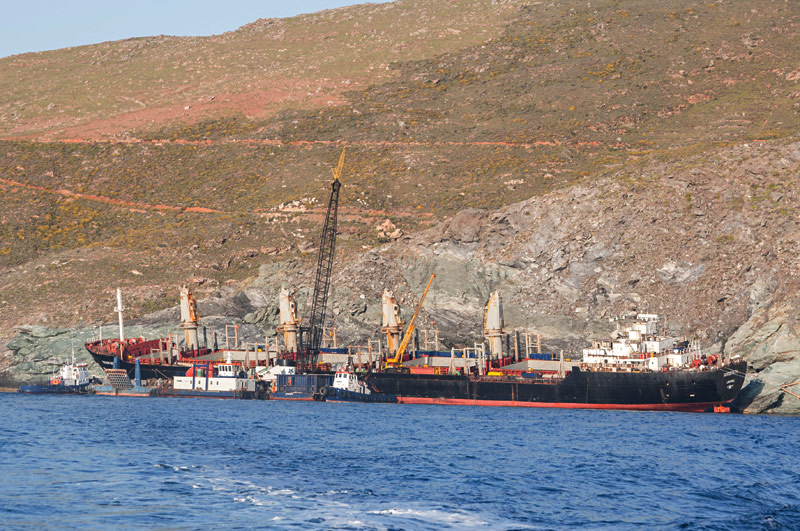 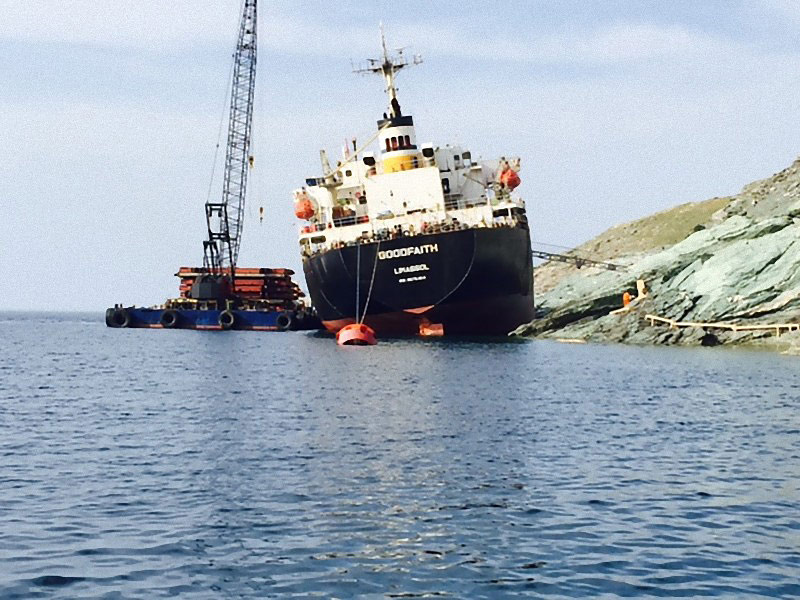 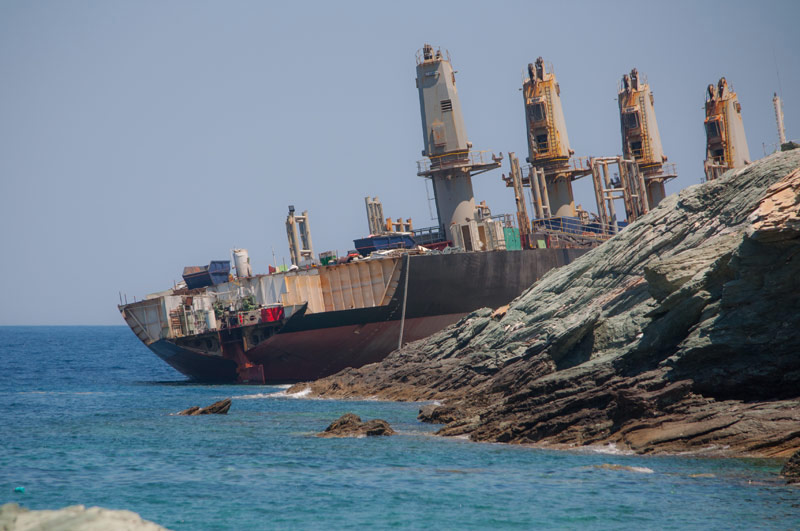 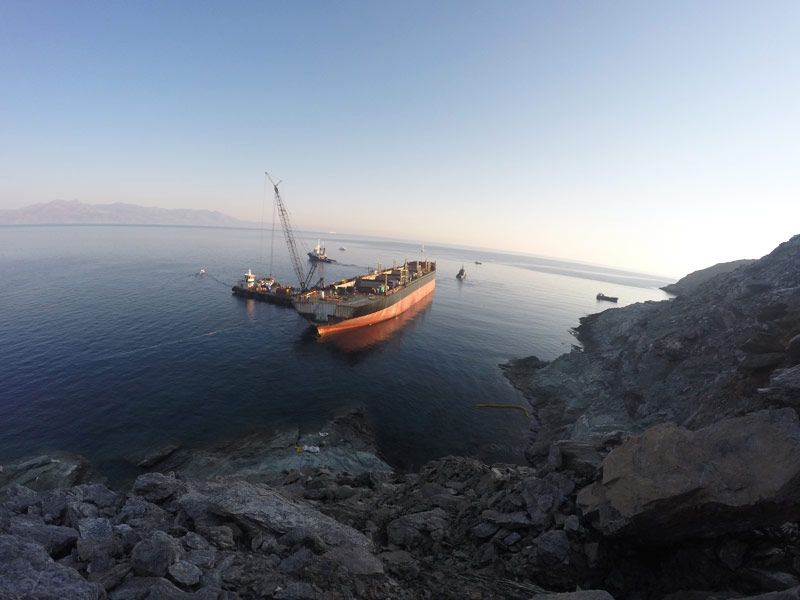 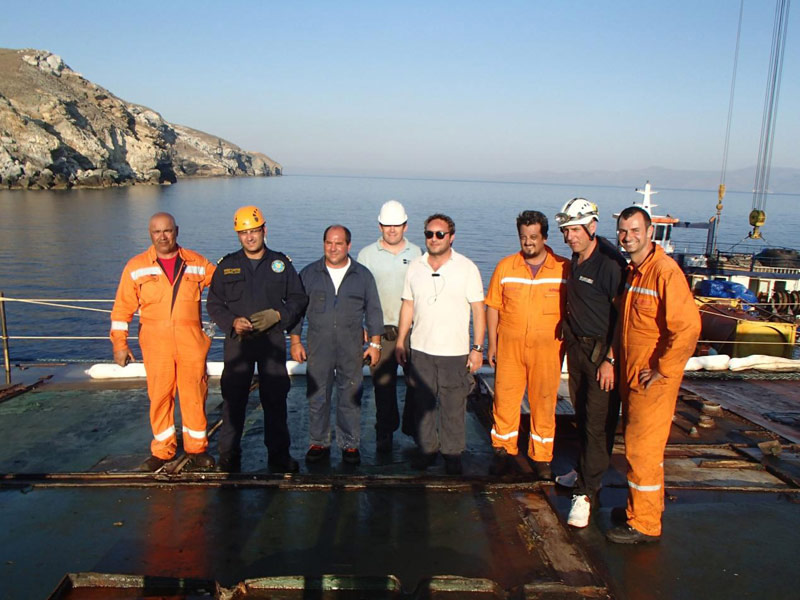