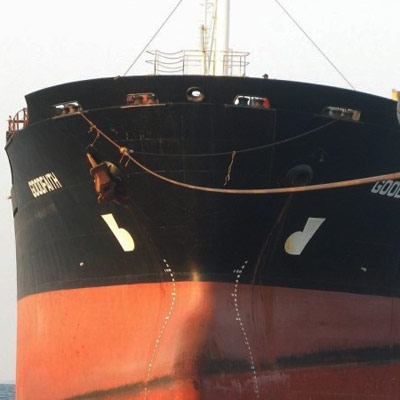 It was October 17th when the last trip of M/V Goodfaith started from Punta Salamina, under the towage of the Spanopoulos Group tugboat "Christos XXII".

It was the morning of February 11 when M/V Goodfaith, a 1994 Japanese bulkcarrier, struck a rocky area north of Andros Island, a few days after her drydocking. That night there were very strong winds blowing in the area. From the first moment the Spanopoulos Bros company has undertaken the necessary procedures of salvage needed in these cases. A few weeks after and after the ship's bridge and part of its stern had been cut, Christos XVII brought Goodfaith's wreck to the Spanopoulos Group's shipyard in Salamis to issue the necessary paperwork from the Greek and Turkish Ministries of Environment in order to allow her to travel from Greece to the scraps of Turkey.

So it was on Saturday afternoon when Christos XXII started her voyage from Piraeus to Turkey's Port of Aliaga. So, after a journey of about 1.5 days, Christos XXII arrived in the morning of Monday 19 October at the Bay of Nemrut and then proceeded offshore to deliver it to its solvent buyers, Kursan Gemi Söküm.