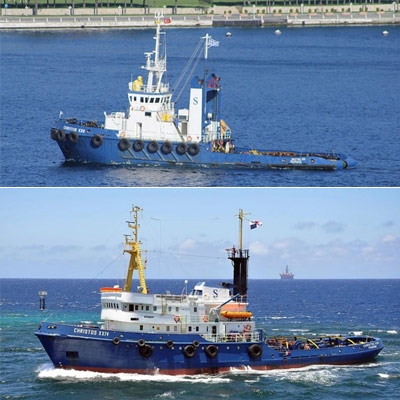 With great success, the inauguration of two new AHTS – Ocean tugs AHTS CHRISTOS XXII, 67 tons of bollard pull (4000 HP) and CHRISTOS XXIV, 55 tons of bollard pull (3600 HP), was carried out on Monday, June 13, 2011 at the shipyard of Spanopoulos Group at Kato Pounta - Ambelakia Salamis, a few hours before the first voyage of the second in West Africa. The fully upgraded tugs were launched under the presence of notable customers, friends and personnel of the group.

At the event, the priest pronounced blessing to all vessels of the fleet and then Group Chairman Mr. Ignatios Spanopoulos greeted the attendees in developing the company's goals by showing that, despite unfavorable economic conditions, the company continuously invests in upgrading its fleet and services offered to customers. Also announced the latest addition to the company, a tug-Support Vessel, 100 tons of bollard pull (8000 HP) with dynamic position DP1, which is under refit by the specialized technical teams of our yard. The baton was taken by CEO Michael Spanopoulos, who thanked the crew of the tugs, the technical and administrative staff of the company for its valuable support and wished to the seamen many and safe voyages in calm seas. The celebration event ended with guests to enjoy delicacies and refreshing drinks from the buffet.